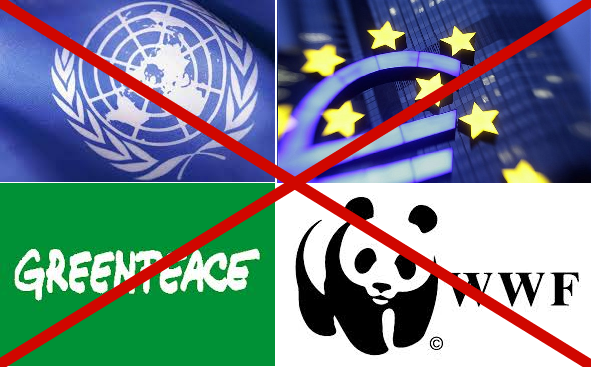 When it comes to the 2011 nuclear attacks on and acts of war against the Japanese people, the unjust and even disgusting glorification, by a large part of the population around the world, of some of the world’s most infamous organizations allows them to further coverup the truth about what really happened in Japan on March 11, 2011.

The UN, the EU, the WWF and Greenpeace, just to name some of the most “popular” corporate brands, are all complicit in the global whitewashing campaign and therefore actively support the deception that has been going on since March 11, 2011. Since they are claimed to be some of the most influential organizations on the planet, it is fair and necessary to take their own opinions and own words about the nuclear attacks and war crimes against Japan very serious.

Even in the event that they have nothing to do with the actual, initial, acts and crimes they all sure are complicit in the whole criminal case and scheme of deception, along with practically all the governments and (mainstream) media outlets from around the world. Because not telling the truth while you have access to it is just as severe as the crimes themselves.

Based on the facts and findings that lawfully support our statements and conclusions that Japan came under attack on March 11, 2011, the events – the nuclear attacks, the deliberately triggered earthquake and tsunami – can therefore not be regarded as merely accidents. Doing so while knowing that the very opposite is true is in itself a crime against humanity, considering the scale of the 2011 events.

We can come to this conclusion, that the UN, the EU, the WWF and Greenpeace are complicit in the coverup of the truth regarding the March 11, 2011, events based on the interpretation of their own words and endorsements.

All the named organizations, the UN, the EU, the WWF and Greenpeace refer to the March 2011 war crimes on Japan as an “accident” in their own wording.

United Nations (who is certainly guilty in more than 50 other documented criminal cases):

European Union (who is involved in many other cases of oppression, deception and corruption):

WWF (who’s patron, Prince Philip Duke of Edinburgh, refers to humanity as a plague on Earth):

Greenpeace (who refuses to address chemtrails and their impact):

In addition to calling the nuclear attacks, the deliberately triggered earthquake and tsunami an “accident” all the named organizations, under their corporate brands, endorse and provide support to the false and fabled official claim that the 2011 earthquake in Japan was a 8.9/9.0/9.1 magnitude event, a claim that has been proven incorrect and fraudulent multiple times since 2011.

The reason why we quote the United Nations the most in this report should be obvious, they are the ones who have full access to all data and they are, dangerously, considered a global government authority by a large portion of the population.

The last Greenpeace quote, above, actually provides a complete overview, in just a few lines, of the deception and how far it’s already reaching.

First of all, the earthquake was not a 9.0 but rather an event with a maximum recorded magnitude of 7.0 and intensity of 6.67, according to the University of Tsukuba. Second, the event on its own did not cause the “nuclear disaster,” given the fact that the nuclear power plant was sabotaged through the use of the US-Israeli Stuxnet virus and through the use of exotic weaponry/explosive devices which caused the explosions and the loss of multiple nuclear reactors. One such reactor, number 4, was even out off business for maintenance so it could not have exploded due to the earthquake nor due to the tsunami without the presence of deliberately placed/remote deployed devices or weaponry.

“Of the 17 diesel generators out at Fukushima, 4 got significant water, and the rest never flooded at all. Yet 12 of the 13 generators that never got an ounce of water switched off all by themselves, and the one that remained running was the only one not connected to a Siemens Scada controller, which the Stuxnet virus infects. One generator remained running throughout the entire disaster, the only one not controlled by a Siemens Scada controller. … It was proven that outside power to Fukushima was never lost, and that the diesel generators would therefore have never been needed. But the power switched off, all by itself, and no one can figure out why. Except those aware of the Stuxnet virus.” – Jim Stone

Furthermore, it is completely ludicrous – and it confirms one’s ignorance, stupidity or deceptive character – to claim that the event “also exposed serious failures in the Japanese system for ensuring the safety of nuclear reactors,” because the explosions were caused by deliberately placed/remote deployed devices or weaponry and were NOT caused by the deliberately triggered earthquake nor by the unnatural tsunami.

“Fukushima was built with the Mark 1 containment design, but beyond Mark 1 standards which was a common upgrade. … Even the basic mark 1 containment was many times beyond capable of withstanding the worst hydrogen blast.” – Jim Stone

Therefore Greenpeace’s claims in their last mentioned quote, above, (along with all the other claims by the UN, the EU and the WWF) only serve one purpose beside of rightfully being forwarded to the trashcan: DECEPTION!

As long as there’s no will to address the reality and the truth, as long as the war criminals who attacked Japan and its people are not being exposed and brought to justice, there really is no point any longer in putting any value in the (dis)information that the UN and their specialized agencies, the EU, the WWF, Greenpeace, the governments and the mainstream media are spreading.

Sending out false prophets like Al Gore and Paul Hellyer or any other psyop fronts will also not contribute anything positive to this or any other urgent cases and it will not put the truth in the spotlight that it deserves. For those who have even the slightest bit of intellectual capacity it should be more than obvious that also the Fukushima events are being (ab)used to further other deceptive plans, such as Agenda 21.